The site and area 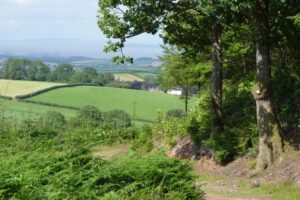 The Quantock Hills is a range of hills west of Bridgwater in Somerset, England. The Quantock Hills were England’s first Area of Outstanding Natural Beauty, being designated in 1956 and consist of large amounts of heathland, oak woodlands, ancient parklands and agricultural land.

The hills run from the Vale of Taunton Deane in the south, for about 15 miles (24 km) to the north-west, ending at East Quantoxhead and West Quantoxhead on the coast of the Bristol Channel. They form the western border of Sedgemoor and the Somerset Levels. From the top of the hills on a clear day, it is possible to see Glastonbury Tor and the Mendips to the east, Wales as far as the Gower Peninsula to the north, the Brendon Hills and Exmoor to the west, and the Blackdown Hills to the south. The highest point on the Quantocks is Wills Neck, at 1,261 feet (384 m).  Soil types and weather combine to support the hills’ plants and animals. In 1970 an area of 6,194.5 acres (2,506.8 ha) was designated as a Biological Site of Special Scientific Interest.

They have been occupied since prehistoric times with Bronze Age round barrows and Iron Age hill forts. Evidence from Roman times includes silver coins discovered in West Bagborough. In the later Saxon period, King Alfred led the resistance to Viking invasion, and Watchet was plundered by Danes in 987 and 997. The hills were fought over during the English Civil War and Monmouth Rebellion but are now a peaceful area popular with walkers, mountain bikers, horse riders and tourists. They explore paths such as the Coleridge Way used by the poet Samuel Taylor Coleridge, who lived in Nether Stowey from 1797 to 1799, or visit places of interest such as Quantock Lodge.